My husband, Jonathan, and I joke that our 7-year-old daughter, Emerson, is me in a him package.

In so many ways, it’s true. She’s inherited all of his gorgeousness — the tall, lean, muscular body type, the huge hazel eyes that are mostly green, the creamy skin that turns bronze at the slightest lick of sun, the distractingly full mouth (honestly, I live with such beautiful creatures, I sometimes feel like a dark-eyed, mop-headed, short-legged Hobbit by comparison.)

From me she gets wicked mischief, and a generous, easily wounded heart. Curiousness, friendliness, a ranging sense of adventure. An inability to hold a grudge. The habit of leaping first and looking later. A flirty, wide-eyed charm that we both inherited from my grandmother, Edythe, whom Emerson is named for. Bossiness, the desire to bend things to her will, a need to negotiate everything. Impatience, and an unwillingness to work terribly hard at anything she’s not naturally good at. Also, a love of impromptu dance parties and lazing in bed on Saturday mornings.

That’s how it looks, on the surface. Him on the outside, me on the inside. But there’s a secret experiment going on here, too, one I observe with a mixture of fascination and heartbreak, hopefulness and grief. Because Emerson is just like me, but with one crucial difference.

She’s what I might have been, if I’d had the kind of father she does.

I didn’t marry Jonathan because I thought he’d be a good dad. I married him for a million good reasons, starting with the way he looks at me when he thinks I’m not watching — a mixture of desire, territorial pride and gentle amusement that never fails to melt me like a lit candle — all the way down the list to the way he can calmly find his way through the woods without a compass when we go hiking.

But I’m told this is a thing some women do, when a relationship turns serious. They don’t just consider what kind of a husband this man might be, if they’ll want to drag him into bed and talk to him over breakfast for the rest of their lives. They think about what kind of a father he’ll be; how he’ll treasure a daughter, raise up a son.

For one thing, I was deeply ambivalent about having kids, and dealt with those mixed feelings by not thinking about them. For another, I was in unmapped territory. My mother kicked my father out when I was 6, and even before then he wasn’t anyone’s idea of a good daddy. We had a difficult, painful relationship that I finally ended when I was in my early 30s. I was, in short, a John Mayer song.

And here is where I tell you that I have a stepfather I love, who treats me with infinite kindness and affection. That is true. And I am grateful for him. But he didn’t arrive until I was 12, and even then, he couldn’t put himself between me and the destructive storm that was my father. He couldn’t protect me from my father’s abandonment, or his selfishness. That wasn’t how it worked. Not for us.

So I chose Jonathan for all the right reasons, but his potential as a dad wasn’t one of them, mostly because I couldn’t have begun to design criteria for the job even if it had occurred to me to do so. What does a good father do exactly? Not abandon you? Not wound you? Not make you question your own essential lovability? Not leave you with a voracious self-destructive emptiness that nothing can fill, not love, not food, not sex, not accomplishment? Surely there has to be more to it than that.

As it turns out, Jonathan is a magnificent father. Patient and kind. Calm. Inventive. Watchful and protective, but not like a helicopter. More like a submarine. They have private jokes. They build things. He takes her to museums and talks to her about art. He plays her songs and talks to her about music. He sketches her portrait. When she was having trouble learning to read, he took her to the comic book store and introduced her to Wonder Woman. On the playground, he is the father with the Band-Aids, with the snack, with the balloons for making water fight bombs.

I find all of this amazing. I feel like an anthropologist in my own house sometimes, observing the way she trusts him, the way he loves her. The ease between them. The way she never doubts he will be there. The way he always is.

She is just like me inside, except I got this way by crawling over a field of broken glass, swimming a river of poison, and fighting like hell to put myself back together. I’m a repaired thing. She has never been broken, and while I’m sure she will get dinged and dented by life, Jonathan won’t be the one to do it.

He’ll be the one with the first aid kit.

The other night I came home, and Emerson was hysterical. There was a spelling test the next day, and she’d failed to study. Jonathan had been trying to help her, encouraging her to write the words ten times each, but she was exhausted and overwrought. I pulled her into my lap and held her for a while, murmuring Mommy things. And when she was soothed enough to listen, I talked to her about Batman, and how his father told him we fall down so we can get back up again. That in life, there are going to be things she’s good at, and others  she’ll fail at, and  the most important thing is for her to show up and give it her best. That we make mistakes so we can learn, and the only people who fail are people who try. I told her she should take a shower, and then she and I would climb into bed and practice the words together. She nodded, willing to give it one more shot, always willing to give it one more try, no matter how hopeless it seems. Just like me.

She slid from my lap, I thought to go take her shower, but instead she walked over to Jonathan and crawled into his lap. Neither of them said a word, she simply buried her face in his neck and twined her arms around him while he held her.

He is her safe place. He is the nest she flies to. She has never once doubted her right to his attention and comfort, he has never once failed to give her what she needs. To be that whole, that loved, to feel that surety — in this way she is nothing like me. And it is perhaps the greatest gift she’ll ever get from me.

Then it was back to business, the shower and pajamas and lying in bed, spelling those words out loud until she felt calm enough to sleep.

Next Sunday is Father’s Day, and while I am resolutely not a greeting card holiday kind of person, it is a day that used to fill me with melancholy in a very specific way, the way an empty beach in winter will. These days, it fills me with gratitude, and awe, and a lingering sadness.

But there’s something else here too, and that is the reckless courage I feel in telling this out loud. Of outing myself as someone who went unloved by a wounded man, and who believed that was the whole story of myself for a long time. And having survived that, there is a raw solidarity, a coded message I want to whisper to the other girls and women like me. The ones who regard Father’s Day with a visceral mix of weariness and disdain, carelessness and sadness.

Come closer, so I can hold your hands while I tell you this.

It’s not just you. It’s never just been you. I know it feels that way sometimes — my own loneliness in all this is a vast cliff I’m still climbing. But I promise, you’re not the only one who avoids the Father’s Day cards in the drugstore. Who blithely asks an uncle or a family friend to walk you down the aisle, while your heart breaks all over again. Who waits in restaurants, knowing he’s not going to show up this time either. Who wonders what course your life might have taken, who you might have been, had you been loved the way you deserved right from the start.

Whatever disaster he left you to mop up, whatever lies he told you about yourself — that you’re worthless, that no one will ever love you, that you’re not enough, that what you get is what you deserve and you should find a way to be grateful for it — it was never true.

None of it was ever true. Maybe you’ve known that for a long time now, or maybe you’re just starting to figure it out. Maybe you’re charting your own course through these dark, mysterious woods with a good man who adores you, a man who doesn’t need a map to find his way home, who’ll lead you there if you let him.

Maybe you don’t believe me. I understand. I wouldn’t have believed me either, not so long ago.

All I can tell you is that none of it, nothing he said and nothing he did and nothing he left you to sort out was ever the truth. You make your own truth, and then you keep telling it to yourself. And what you deserve is everything my daughter has — a world of love and safety, strong shoulders to rest your head on, a net to catch you should you fall too far. You deserve things that perhaps you don’t even know how to wish for, not yet.

And I hope you get all of them. Every last one. 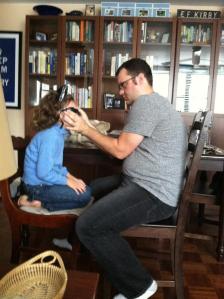 Emerson and Jonathan, Halloween 2012. She was Catwoman.

6 thoughts on “Some Thoughts on Father’s Day, and Spelling Tests”