Such were my circumstances on a recent Thursday morning, when I found myself blissfully showering in an empty house, all on my own but for the company of my Clarisonic. A Clarisonic, if you’re unfamiliar, is a cleansing brush that oscillates at a sonic frequency that produces over 300 movements per second. It’s a power washer for your face, essentially. It is also a waterproof, handheld device that vibrates at a truly admirable rate.

“Why not?” I thought, and proceeded to have a perfectly lovely interlude with the business end of my Mia 1.

By now, in my mid-40s, you might think I’d learned a few things. Such as, if one is beginning an adventure with the thought, “Why not?” one might pause for a moment to go ahead and answer that question PRIOR to skipping gaily forward. Perhaps one might think, “Self, despite its pleasing shape and cheerful vibration, this device is designed, literally DESIGNED, to remove deep-seated impurities from the skin. It’s for DEEP CLEANING the skin ON YOUR FACE which is exposed all the time. Do we really think this sonically oscillating brush head is something we should jam against our usually sheltered flower?” And further, to paraphrase the poet — Chris Rock — just because one CAN masturbate with a thing, does not mean one OUGHT to.

But la-di-da, I have always been a devil-may-care, pay-the-piper-later, adventuresome sort of girl. “Why not?” is my raison d’être.

Sisters, look upon me and learn, for I have dirty danced with sonic technology and come home to tell the tale.

First came the stinging, a sensation very much like rug burn, only decidedly more painful and in a place where you’d really have to work to get contact with a rug. It grew worse as the day progressed, and by the next morning the situation had escalated. 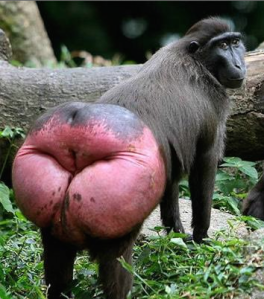 Yes, in the wake of my Clarisonic indulgence, my secret garden had swollen to a primeval forest. It had swollen past the point of pants, sitting, or clarity of thought.

I did the only rational thing, and I called my best friend, Lisa.

“I’ve made a terrible mistake,” I said, and confessed my folly. She stopped laughing at me long enough to burst into a parody of My Sharona, thusly:

Never gonna stop, give it up
Such a dirty mind, always get it up
For the touch of the vi-bra-ting kind
My my my i yi woo!
My my my my CLAR-I-SONIC

I spent the weekend alternating between warm compresses, perching on an ice pack, and suffering my husband’s amused sympathy.

Eventually the swelling subsided, to be replaced by the itching. This was a hellish itching, spawned by Satan himself in an fiery underground bunker where punishment is born. I withstood it as long as I could, then finally broke down and made an appointment to see my gynecologist.

Of course, I am not the first person to turn up at the doctor with a story of self-pleasuring gone awry. But like so many things, it’s only funny if it’s NOT YOU explaining how your Clarisonic talked fancy to you and now that the baboon swelling has subsided you itch in a way that is Biblical. To her credit, my doctor was understanding and matter-of-fact. She examined me carefully and pronounced me healed but suffering from bacterial vaginosis. The cure? Five days of a cream to be applied nightly, and a gentle suggestion not to do it again.

For the record, Clarisonic has not called, texted, or emailed me since this all went down. It’s also unfriended me on Facebook.

14 thoughts on “Curiosity and the…Cat”